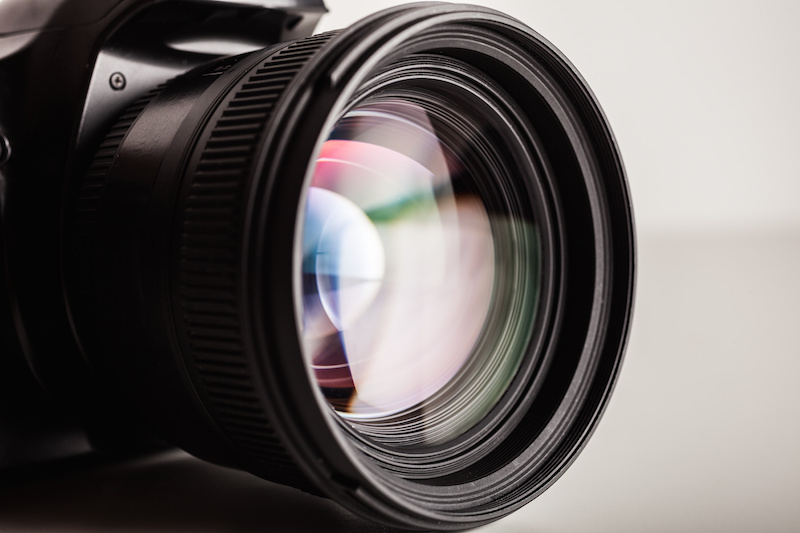 DSLR cameras are incredible for a variety of reasons.

But one of the most sought after features with these camera bodies is the ability to change its lens whenever you want.

Check out the video below to get a deeper understanding of how camera lenses work, and which one might be best for your DSLR camera.

Keep reading below to get a deeper understanding of camera lenses.

You see, the lens on your camera is what really makes all the magic happens.

And once you know how to control your lens, you can really start to make incredible videos.

But before we go into the different types of lenses, let me explain something that’s built into EVERY camera lens…

What the Heck is “Aperture”?!

Aperture is controlled by the opening and closing of multiple blades inside of a ring in your lens.

Each step, up or down, is what’s known as an F Stop and is represented by the F-Stop number on your camera lens.

We’ll go into more detail about aperture in another post.

For now just remember that the HIGHER a lens’ aperture number is (which again, is represented by a number with the letter F in front of it), the LESS that lens will be able to see in low light conditions.

And the The LOWER the aperture number is, the MORE that lens can see in low light conditions.

Now, when you’re purchasing a lens, the F-number on the box is telling you the LOWEST possible aperture that you can achieve using that glass.

So as you can imagine, the lower the number, the better it can see in the dark (and the more expensive the lens is going to be).

Depending on what you plan on shooting will determine which lenses you might want to invest in.

NOW! Let’s talk a little bit about the different types of lenses and what kind of results you get from them…

The lens that usually comes with a DSLR camera right out of the box is called a zoom lens.

So, for this particular example, let’s pretend that you bought a DSLR and in the box you found an 18 mm to 70 mm zoom lens.

Now, what exactly do those numbers mean? “18 to 70” defines the lenses power of magnification.

So, basically how FAR it can magnify something as you zoom into it.


And the numbers themselves are measured in millimeters.

What this zoom does is allows you to adjust your frame, so you can take control of what is and is NOT in your shot.

if you’re trying to shoot an interview in a public place and you really only want to frame the interviewee, you’d typically zoom closer INTO them.

This will eliminate any other distractions in your shot.

As a side note, zooming into a subject is usually used to add more emotion into the frame.

The tighter the frame feels on your subject, the more intense every facial expression, movement, and word seems when they do something.

Make sure to keep that in mind when you’re trying to convey any emotional moment in your videos.

You’ve probably heard people before saying, “Oh yeah, I totally shot that on a 24 mm”.

That number is referring to the POWER of the zoom on that particular lens.

And the technical term for that “power” is actually referred to as your FOCAL LENGTH.

On most all camera lenses, you adjust the zoom by turning the ring on the top.

You’ll also see numbers next to and ON the ring which tells you what focal length you’re working with.

The other ring that you’ll find on ALL lenses is called the FOCAL RING.

This ring allows you to adjust the focus of your lens so that you can manually make your background blurry and really showcase the subject or item that you’re trying to convey in your shot.

The biggest benefit for most videographers using DSLR cameras is that using different lenses and being able to use this type of “focal blur” trick. (also known as “Bokeh“)

The “Focal blur trick” is what gives your videos that “cinematic hollywood” effect that used to cost upwards of $40,000 to produce!

But as you now know… that’s not true anymore.

They don’t always SOUND amazing, but there’s an easy fix for that too.

A prime lens (also called a fixed lens) gives you the very best in optical quality.

The ONLY problem with these lenses is that they don’t have the capability to zoom in and out.

So instead, if you want to zoom into something or get a close up on your subject, you have to PHYSICALLY move your camera and tripod.

This might sound like a serious pain in the ass, but in reality, these lenses produce the BEST quality, hands down.

In fact, with the exception of a few live event productions, I typically ALWAYS shoot with prime lenses.

And yes, because they’re so amazing, that also means they’re a little more expensive than your typical kit zoom lens.

My biggest tip to you when starting out and choosing a lens, is to stick with your kit zoom lens FIRST.

Learn what kind of shots you’ll be producing by looking at the millimeter gauge on your lens.

THEN, if you’re actually ready to try out a prime lens, try googling a local camera lens rental shop.

They are usually super cheap if rent them by the week or on a weekend.

(BONUS PRO TIP : Borrowlenses.com is my preferred vendor to rent lenses and DSLR cameras. Use this link to get a discount on your order!)

A wide-angle lens refers to a lens whose focal length is substantially smaller than the focal length of a normal lens for a given film plane.

This type of lens allows more of the scene to be included in the photograph, which is useful in:

A wide-angle lens contains a large piece of glass, which makes the focal length much smaller than a normal lens.

This allows it to somewhat squeeze more information into the frame and output a “wide” style photo.

You can use these types of lenses to shoot wide architectural, interior and beautiful landscape structures in your videos, which can be used as “establishing shots”.

Well, in general film practice, it’s the first shot of a scene that tells your audience where everything is about to take place.

(We’ll go over some more of these detailed filming techniques in a later post.)

The last type of lens that I want to cover is the macro lens.

This type of lens is usually used for shooting extreme closeups.

And by that, I mean it focuses incredibly close to whatever it is you want to film.

This type of lens can take a shot of ants, legos, or even a shot of something seemingly bland (like the leaves on a tree) and really make the subject POP in the frame.

That’s what it’s built for.

And if used properly, it can add a sense of giganticism to anything that you’re filming.

So, if you’ve always wanted to shoot a film starring your teacup yorkie or that brand new litter of kittens that you just acquired… You’d do it using a macro lens.

Alright! Camera lenses explained! That wasn’t so bad… was it?

Please feel free to ask any questions you might have in the comments below.

In our next post, we’ll be talking about aperture, iso, shutter speed, and all that other camera jargon that you HAVE TO KNOW to make great video.

Make sure to sign up for the Content Creators Lounge Membership to get more tips on creating Flipped Classroom Videos!

Jon Acosta is a Digital Media Advisor based in Atlanta, GA. His primary focus is helping companies outsmart their competitors with smart online marketing strategy. Acosta has been a digital video consultant and mentor for some of the largest Fortune 500 companies. Some of his cliental include Apple Inc., Tekla (a Trimble Company), and Elance Inc (now known as "Upwork"). He is also a frequent course author for Pluralsight; an online technology training platform built for corporate teams.